After becoming a demon, Nejuko can’t go out in the sunlight. Most of the daytime she stays in a box. Though she never complained, this is extremely boring to her. After all, why a demon (or human) would like to live in such a tiny box alone! That's why her elder brother Tanjiro decides to give her a problem to solve to bring some excitement.

Tanjiro drew an equilateral triangle ABC with its circumcircle. Then he drew three half circles each based on exactly the sides of the triangle. Finally, he got a figure like below. 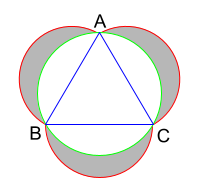 Now Tanjiro gives the length of the side AB of the triangle and asks Nejuko to find out the area of the dark shaded region.

After doing this much stuff Nejuko started feeling tired. She needs to sleep now to gain some energy. Before going to sleep she asked you to solve the same problem.

The input will contain only one integer AB, the length of the one side of the triangle.

You have to output the area of dark shaded region. Your answer is considered correct if its absolute or relative error doesn't exceed 10−6.

If we subtract the area of the circumcircle from the summation of area of triangle and area of the h...