A Merry-Go-Round cam be considered as a circle, balanced on a pivot at the center, that looks like this: 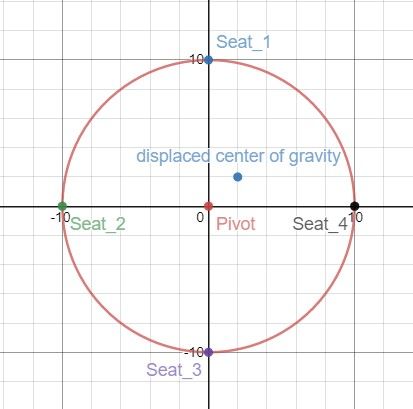 Another specialty of this Merry-Go-Round is its cost of riding. This cost is defined as the distance from the center of the circle to the displaced center of gravity. This distance is calculated as Pythagorean distance between two points i.e. $\sqrt{(x_0 - x_1)^2 + (y_0 - y_1)^2}$.

You are a genius and found out that if you can make your friends take seats in some particular ways, the cost could be reduced. Now you are given the weights of your $N$ friends, $w_1, w_2, \dots, w_N$ (not necessarily all equal), and the radius of the circle $R$. Find out the minimum cost you need to pay for the ride.

N.B.: You should ignore the weight of the circle.

It is guaranteed that the sum of $N$ over all test cases does not exceed $10^6$.

For each test case, print the minimum cost you need to pay in separate lines. An absolute precision error of less than $10^{-6}$ will be ignored.

Case 1: sum of the rest &lt; Biggest We are putting all the objects in two points in a single line...